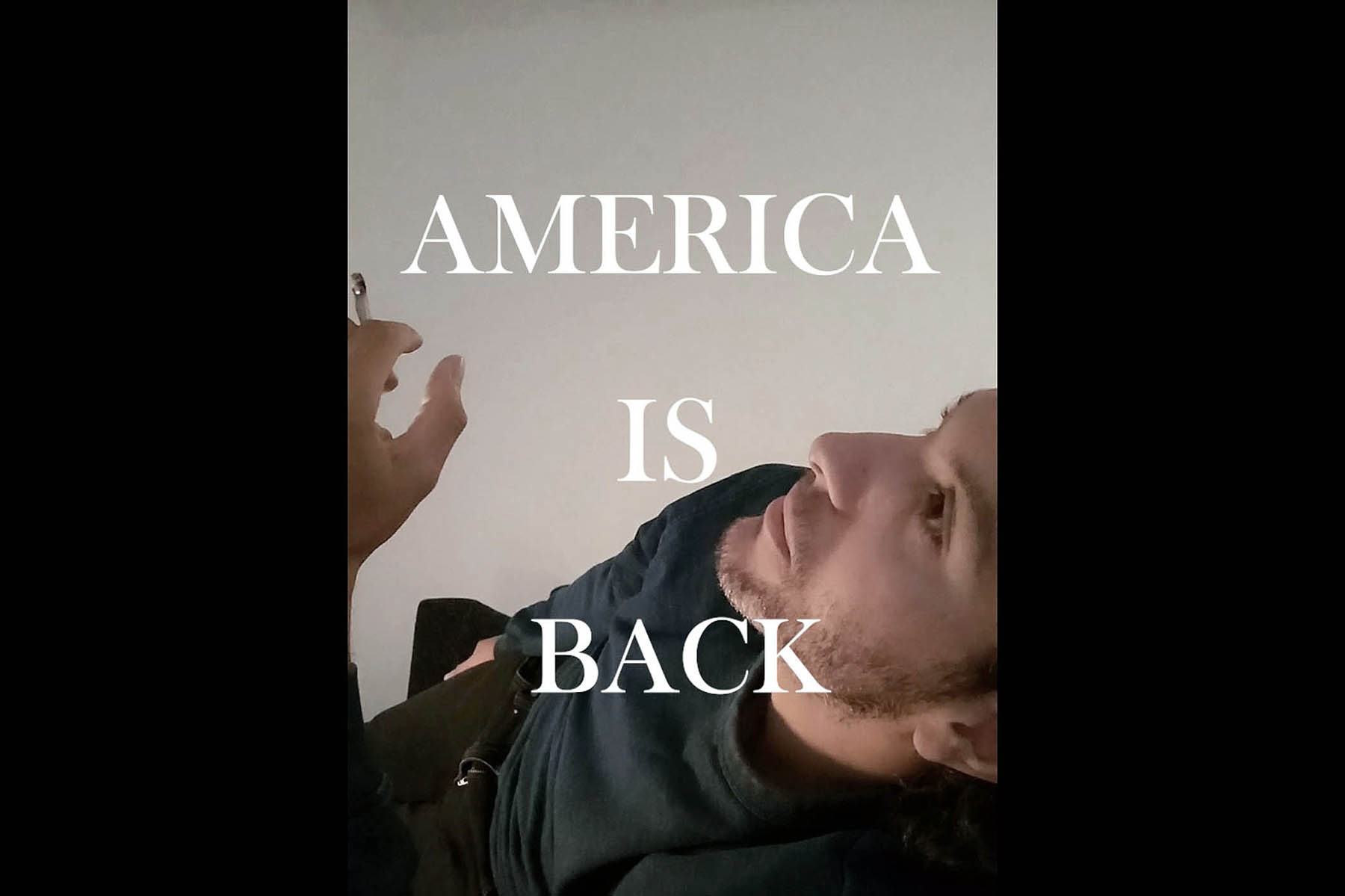 The exhibition “America is Back” focuses on the use of sound, speech and music in psychological warfare by the American military in two recent historical conflicts – the war in Iraq and the invasion of Panama. These two events outline the use of psychological warfare not only as an extension of conventional warfare but also as a means to showcase cultural mirror imaging and America’s hegemonic attempt to impose its own liberal cultural values on other cultures.

The first event is enacted in Gal’s new work “Inherent Resolve” (2021). In the video an actor is laying on the floor making a selfie video while addressing the viewer in an intimately seductive manner staged as a homage to Vito Acconci’s seminal video work “Theme Song” from 1973. In contrast to Acconci, who seduces the viewer, entices him or her to join him, and as a result points to the unbridgeable barrier created by the medium, the actor in Gal’s video recites audio messages broadcasted by the U.S. military through local Iraqi radio stations during the Battle of Mosul in 2016. During this battle, also known in the U.S. military as “Operation Inherent Resolve,” radio messages were designed as psychological warfare in an attempt to persuade ISIS fighters who were holding Mosul at the time to abandon their cause and join the U.S. backed authorities.

The second event is narrated through the sound installation “Panama City, Christmas 1989” (2017). The work refers to one of the key moments of post cold war American foreign policy – the invasion of Panama in December 1989 and the apprehension of General Manuel Noriega which took place a month after the fall of the Berlin wall. The historical diorama displayed inside a museum vitrine depicts the scene during Christmas 1989 after Noriega had fled into the Vatican Embassy in Panama City. In an attempt to bring Noriega out from an extra jurisdictional zone, the U.S. Southern Command Psychological Warfare unit installed loudspeakers and ‘blasted’ the Vatican Embassy compound with Rock music like Guns N Roses, “Welcome to the Jungle”, or Van Halen’s “Panama”. The story of this event and its background as an operation that became a ‘blueprint’ for future U.S. wars is told in the audio documentary played from the vitrine’s sound system. The audio is composed from interviews Gal made with people who witnessed the event, found footage and the rock songs listed in the official military report displayed as an enlarged silkscreen print on the exhibition wall.

In addition, Gal presents a golden brooch titled “The Rime of the Ancient Mariner”, (2017). The object is a replica of a clip-on microphone typically used in documentary films and interviews. It bears the title of a poem by Samuel Taylor Coleridge from 1798. This poem, which gives an account of the experiences of a homecoming mariner, was mentioned by the Holocaust survivor Primo Levi as an example of the necessity of reporting as a witness for those who can no longer do so. In this sense, the object signifies the moment of transference between witness and listener and the juncture between oral testimony and aural document.

The project is the second part of the series entitled MUSIC WITHOUT MUSIC presented by Yellow Solo in 2021 and 2022 with the participation of the following artists: Annika Kahrs, Dani Gal, Anri Sala, André Vida, Arnold Dreyblatt, Hassan Khan, Maya Schweizer, Song-Ming Ang, Katarina Sevic, Ari Benjamin Meyers and Olaf Nicolai. We will continuously provide information on the consecutive solos.