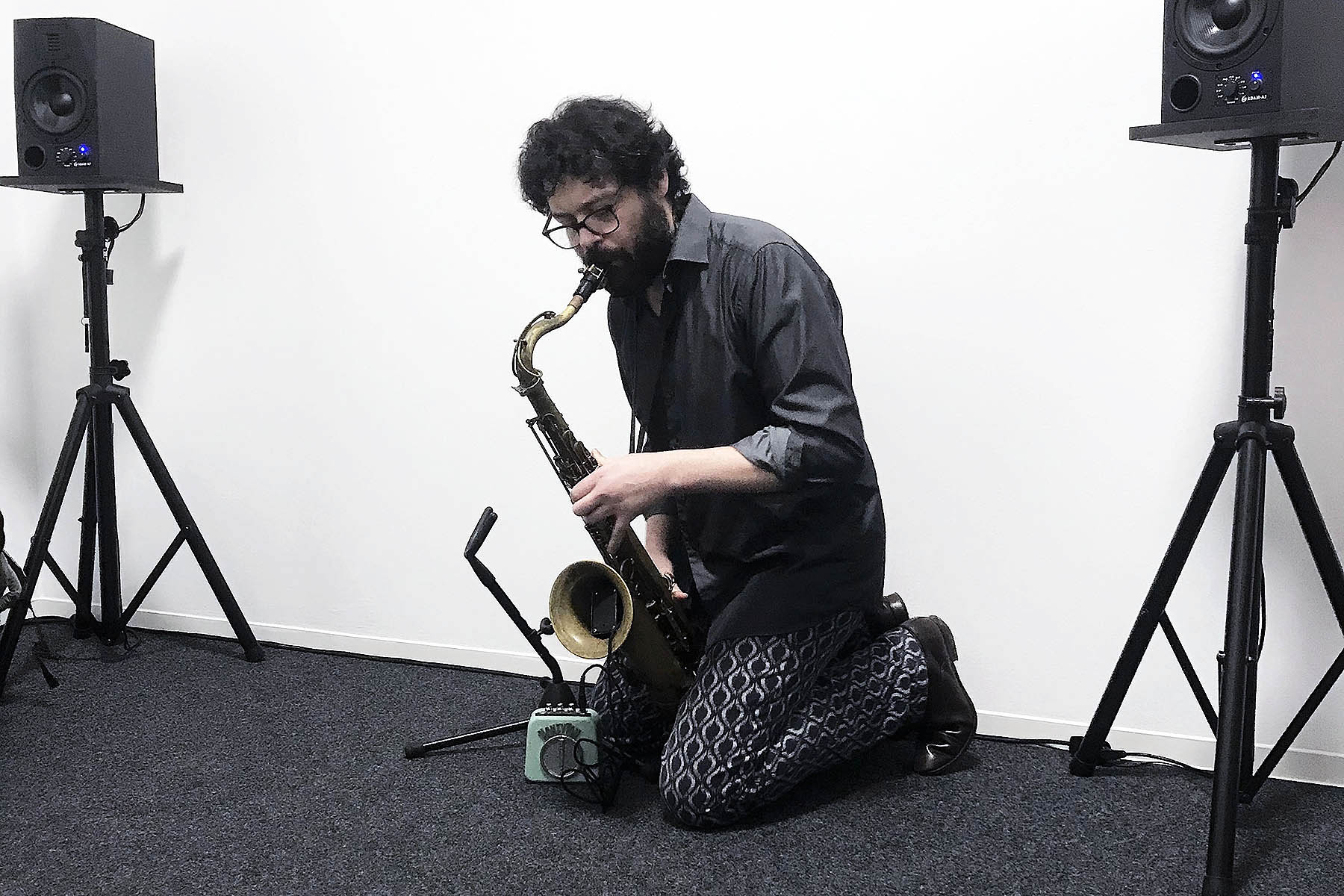 “Having spent years confronting the present moment with a saxophone in hand has led me to understand the idea that while time maintains an illusion of moving forwards, it has a way of facing backwards. In practice, I often find time and it’s forms of notation to be at philosophical odds with those spontaneous traditions that dwell in moments of presence. And this friction has fueled me to look for ways to augment that endless moment and shape it.”

“This Side of Waking is an unreleased album of songs written and recorded from 2010 to 2012 by myself and produced by Rashad Becker. After extensive mixing and production, I could not find an interesting label. Out of interest to find another way to spread this material, I am using this show to create a space for the interested bodies of Berlin.”

“Taking it’s a cue from the Residents’ American Composers Series 1984-1986, I started MACOGA – Make American Composers Great Again by commissioning reworkings of a select group of composers who were Americanized during the Twentieth Century. These first incarnations start with reinventions of Igor Stravinsky’s, Firebird Suite by LapCore and Edgard Varese’s, Amériques with support from James Brown by Savvy and Dré, 2020.”

“Sound Investments are based on investigations of the price histories of capital assets such as Gold, S & P 500, Bitcoin, as references for mapping and understanding musical time. Instead of five straight lines, I use these fluctuating histories as musical staffs, hanging above the notes and coded cards as transparencies. In performance, these shifting staffs reflect something closer to the relativity of a musical moment asking the performer to interpret shape and meaning in a dance with the image.”

André Vida (b.1974) is a Hungarian American saxophonist, composer, and lyricist living in Berlin. Vida has performed widely as a soloist and has collaborated with a diverse group of artists including Anthony Braxton, Kevin Blechdom, Tarek Atoui, Hildur Gudnadottir, Max Loderbauer, Rashad Becker, Nico Dockx, and Jamie Lidell. He has worked closely with Anri Sala on performances at the Serpentine Gallery in London, the Roman Amphitheatre in Arles (produced by the LUMA foundation), Frieze London and the Havanna Biennale.

Vida has been commissioned by Hyper! at The Deichtorhallen, the Tri-Centric Foundation, Global Art Forum 7 and 10, the 8th Berlin Biennale, Eyebeam, and the European Sax Ensemble to create new performance pieces focused on the medium and materiality of scoring. These works include explorations of interactivity, animation, lighting, and clothing design as elements of a compositional system based on the physicality of performance. A three-volume set of his work from 1995 – 2011 was released on PAN, his piece for 41 saxophones, Minor Differences, was released on Entr’acte, and he has been featured in The Wire, TANK, Monopol, and Electronic Beats.